Contractor turnover during construction is a risk that even the best planned project may need to mitigate. When a Coreworx client had that risk materialize, their interface management program helped the project team rapidly select and re-mobilize a new contractor. In turn, this helped them minimize resulting downtime and finish the project on schedule. This article examines the critical information their interface management program provided them during construction, allowing the team to rapidly rebound from contractor turnover and complete the project successfully.

Before getting into the details regarding how contractor turnover during construction can be mitigated, let's look at the project itself. It was a $13 billion project located in a very remote, northern location in Canada. The site was so remote, it first required building the infrastructure, roads, and buildings needed to support development and construction of the site. Even with the challenge of such a remote location, the project was considered one of the best undeveloped, long-term assets in the region. This assessment was based on product quality, the size of the resource, potential production volume (which was 194,000 barrels per day), and the mine life which was expected to be in excess of 50 years.

The complexity of building this asset was high, involving both upstream and downstream, new construction, pipelines, transportation, and brownfield tie-ins that had to be managed. It was also a very long project, running six years from FEED to operations. The project was very challenging and complex. It had all the hallmark characteristics that contribute to a high-risk project and this type of complexity and risk is very common with today's capital projects.

Although risks are very much a part of managing capital projects today, what sets this project apart from others is some of the additional risks that materialized and how the team overcame them to get the project completed on schedule, using interface management. See all risks and challenges from the webinar here, but let’s dig into contractor turnover and mitigation on this project.

Contractor turnover is always a high risk on any project during construction and it materialized on this specific project. Safety violations in the field resulted in the dismissal of the contractor. Once the contractor was dismissed, the team immediately focused on the need to re-mobilize a new contractor as quickly and effectively as possible.

Fortunately, the team’s disciplined approach to transitioning interfaces through engineering and into construction meant they had the information needed to make rapid re-mobilization a reality and minimize project downtime. Some of the information captured in their interface management program included data on soft interfaces that provided answers to critical questions, including:

This information provided the discovery team (side note: when you release a contractor, corporate involvement is triggered) the information they needed to identify where the project was at when they ordered the dismissed contractor to stop.  And the same information also assisted them with the potential litigation management of terminating a contractor.

On top of all that, information they captured for interface management allowed them to quickly bundle up the scope of work that was still outstanding to support the rapid tendering and re-mobilization of the new contractor. And once the new contractor came on board, the detailed interface register allowed them to familiarize the new team members and get them up to speed in a short amount of time.

When put in the unwanted position of dismissing a contractor, this predicament could have had a significant negative impact on the project’s schedule and ultimate outcome. All the down time between dealing with the dismissal, to the discovery process, to re-tendering for and re-mobilizing a new contractor could have completely derailed this project from it’s planned schedule. However, the project’s interface management program and supporting system saved the day. The interface information they had on hand due to their interface management program put them in a position to rapidly transition through a very difficult phase and bring a new contractor on-board in a short amount of time and complete their job on time. Interface management certainly helped the team to mitigate overall project risk during construction and here, it also enhanced their contract management tendering process - an added bonus!

As noted above, navigating through contractor turnover is one of the ways interface management helped this project mitigate multiple project risks that occurred during construction. And although an interface management program gets implemented during planning and engineering, looking at the impact is has on construction risks really helps to drive home why this discipline is essential to every project phase. 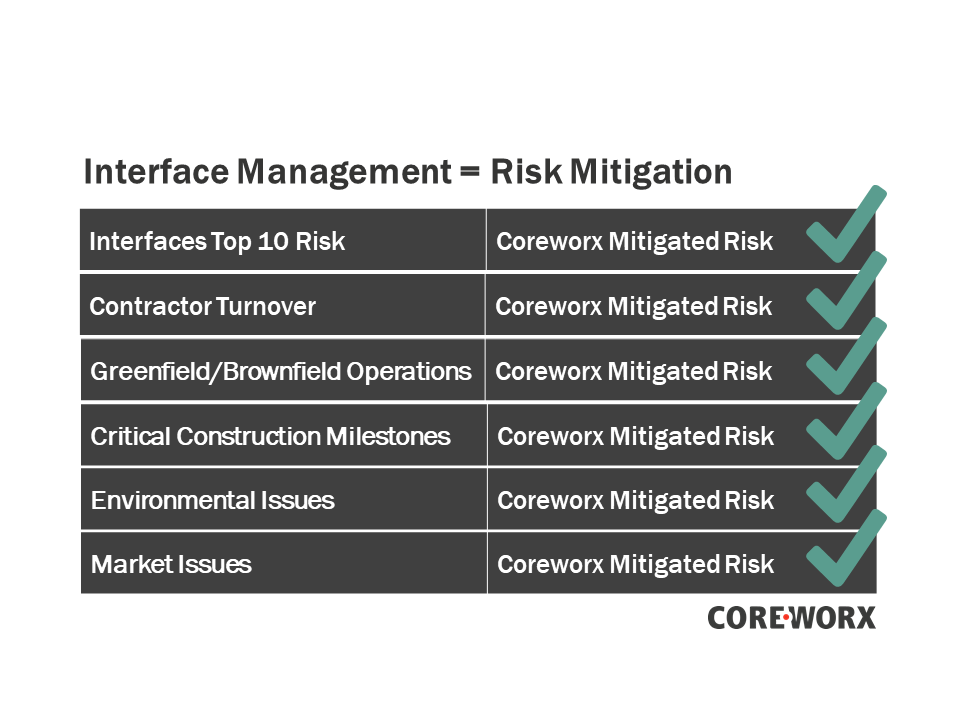 Select Different CTA for each Post from Blog Editor

Let Us Know What You Thought about this Post.

How to Ensure Your Project Upholds Doc Control's Values